El Borak and Other Desert Adventures 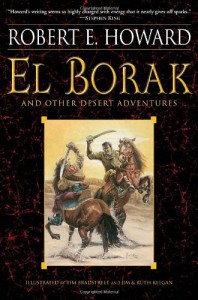 Down in the west Texas town of El Paso was born Francis Xavier Gordon, known by repute from Stamboul to the China Sea. Muhammadans called him El Borak, the swift. They feared and respected him. An evil Hungarian called Gustav Hunyadi may be his match. This villain is plotting to send a howling horde of fanatics against the Indian border and plunge Central Asia into a religious war.

El Borak has papers proving the plot and is taking them to Fort Ali Masjid, but a group of the fanatics is out to stop him. He has not one chance in ten thousand of getting out alive! ‘Swords Of The Hills’ is a ripping yarn set in the days when we British ruled India and noble, square-jawed American adventurers exercised their lean ‘thews’ and fighting skills to help us out. The first story in this book, ‘El Borak And Other Desert Adventures’, very much sets the tone for the rest of it.

In ‘Three-Bladed Doom’ you have to make an effort to get the characters straight in your head right from the start. El-Borak (Francis Xavier Gordon) is subject to an assassination attempt in the streets of Kabul. He has been to see the Amir to plead the case of Baber Khan who is accused by others of sedition. El-Borak has promised to defend him against the charges but Baber Khan fears for his life and won’t come to Kabul to stand trial. El-Borak sneaks off in the dead of night to try to persuade him.

Naturally, things get complicated with more terrifying tribesmen barring the way of our noble hero. Then he goes to track down the Hidden Ones, an assassination cult who have made an attempt on the life of the Emir. They are hidden in a lost city in the mountains. There’s a ‘slender and supple’ girl, too, kidnapped from India, who needs rescuing. El-Borak is death on legs and so terrible is his reputation that he can frighten bandits into submission just by telling them his name but even he needs some help to fight a whole city full of villains. ‘Three-Bladed Doom’ is about a hundred pages long.

Howard sometimes told the hero’s tale through the eyes of a lesser man. Conan was seen through the eyes of Balthus in ‘Beyond The Black River’. In ‘Sons Of The Hawk’, the story opens with Stuart Brent finding a fatally wounded man on his doorstep. With his dying breath, Dick Stockton tells Stuart he must go to India, then to Afghanistan and find Francis Xavier Gordon. He must tell him that the Black Tigers have a new prince. They call him Abd el Khafid but his real name is Vladimir Jakrovitch. He is to be found in Rub el Harami, the Abode of Thieves, and then Dick dies.

Stuart Brent is a gambler, not an adventurer, but he has a code. He’s British, after all. Stockton is an old school chum and his last will must be done. So it’s off to Afghanistan, where he is captured, chained and spat on by beastly tribesmen who are carting him off to Rub El Harami as a slave when a mysterious lone rider fearlessly approaches. It’s El Borak, of course, but he identifies himself as Shirkuh. Clever that. A lot of these outlaw types don’t want to work for a living. ‘Sons Of The Hawk’ then develops along the usual lines of sword fights and treachery.

‘Hawk Of The Hills’ is a tale of treachery in Afghanistan. Treacherous Afdal Khan and his Orakzai henchmen have slaughtered Yusef Shah and several other Afridi tribesmen during what was meant to be a peaceful supper. El Borak scarcely escaped with is life and dodged his pursuers by scaling an unscalable cliff that no man had ever scaled before.

After a bit more fighting, he escapes and begins a blood feud with Afdal Khan that sees villages burned and many slaughtered. Geoffrey Willoughby is sent by the English Secret Service to end the feud which threatens the rich Persian caravan trade with India. Much of the story is told from Willoughby’s point of view. Howard often views his heroes through the eyes of a secondary character as it would be immodest of them to constantly ponder how great they are. The twists and turns are good and the ending is quite clever.

There are seven El-Borak stories altogether, the bulk of the book which explains his name on the cover. The other adventurers featured are Kirby O’Donnell and Steve Clarney. Although not totally dissimilar to El-Borak in that he’s not an overweight clerk working in the colonial office, Kirby O’Donnell is slightly different. Lean of thew, compact and powerful, he has blue eyes instead of black. He battles a bloodstained path through ‘Gold From Tatary’, ‘Swords Of Shabrazar’ and ‘The Trail Of The Blood-Stained God.’

Steve Clarney, ‘hard and tough as a wolf’, is allotted just one story, ‘The Fire Of Asshurbanipal’ which seems familiar. Perhaps it was adapted as a Conan story for comics by Roy Thomas It’s the old lost city with forbidden treasure yarn. The jewel gives the story its title. The place it’s hidden might well be the City of Evil spoken of in the Necronomicon of the mad Arab Alhazred, a nod by Howard to H.P. Lovecraft, his ‘Weird Tales’ peer.

As Steve Tompkins points out in his useful and interesting introduction, El Borak is really a western hero, a gunfighter of the untamed frontier moved to the wild east for his adventures. Like Natty Bumppo, in ‘The Last Of The Mohicans’, he is as wily and clever as the natives he battles and, like any Howard hero, he’s possessed of incredible stamina, enormous courage, and the great strength of those mighty thews. Kirby O’Donnell and Steve Clarney are cut from the same cloth, also the material from which Conan was made.

In the days before television or even popular radio, the masses took their pulp adventures in print which at least had the benefit of expanding our vocabulary and making our brains work a little. These stories are worth preserving but, like all strong medicine, best taken in small doses which is why it took me a year to read the book.