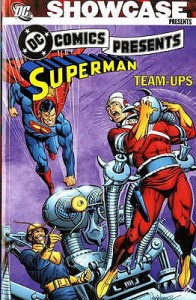 The collection opens strongly with a two-part Superman and Flash story in which they have to race to the end of time, under threat from evil aliens who will destroy the Earth if not obeyed. The aliens have been fighting for millennia and one side wants to stop. The other lot don’t. I liked the concept of a ‘cosmic curtain’ at the end of time which you go through to get back to the beginning. Excellent script by Martin Pasko and great art by Jose Luis Garcia-Lopez, who is very much school of Neal Adams and just as good as his main influence. He’s ably inked by Dan Adkins.

In issue # 3, Superman teams up with Adam Strange when the evil Kaskor boosts the zeta rays that transport Adam to Rann. So boosted are they that Earth and Rann swap places in space. Garcia-Lopez performs more wonders with the art, inking his own pencils this time. It’s still school of Adams but with hints of John Buscema on page 5, panels 2 and 5. The script was by David Micheline.

Issue # 4 teams our hero with the Metal Men against the giant Chemo. Len Wein’s story was okay but the art is king again here. DC Showcase Metal Men # 1 is one of those volumes that now costs more than the cover price to buy. Like Doom Patrol, they were a quirky team.

It’s beastly to say the art goes down in quality with issue # 5 and unkind to that worthy professional Murphy Anderson who provides both pencils and inks when Superman teams up with Aquaman to stop a civil war between two undersea cities, so I won’t say it. Perhaps DC Comics used the clever device of launching a new series with top talent to get the readers hooked, in the hope that they would stay on after it left. In the 60s, most new Marvel series had their first few issued pencilled by Jack Kirby for the same reason. A rocket needs the biggest boost at lift-off. Anderson is the DC house stylist par excellence and his work is easy on the eye so it’s not really a complaint but that Garcia Lopez fellow certainly packs a mean pencil.

Green Lantern is Mister Kent’s next teammate when the weapons masters of Qward set Star Sapphire on him in an attempt to get his ring. The next issue is a follow up to this as Superman gets help from Red Tornado to prevent the evil Qwardians conquering Earth. Red Tornado is a logical robot trying to learn how to be more human, an old cliché now but fairly new at the time if still inexplicable. When I read how humans behave, I think we should try to be more like robots.

There follows a parade of DC characters co-operating with the Kryptonian: Swamp Thing, Wonder Woman, Hawkman, the Legion of Super-Heroes, the Atom, Black Lightning, Firestorm, Zatanna, Batgirl and the Elongated Man,. Some time travel shenanigans allow Superman to go back and fight alongside Sergeant Rock and even battle Superboy. This run is pencilled by Joe Staton or Dick Dillin. Staton’s pretty good but Dillin’s art is never great and sometimes the figures look deformed. Rich Buckler pencils a team up with Mister Miracle but oddly doesn’t do his Kirby pastiche on this Kirby character. The stories by Steve Englehart, Martin Pasko, Cary Bates and Paul Levitz and Gerry Conway are generally okay. Nothing mind-blowing.

This comic book series is from 1978 and there are a few talents here that I associate more with Marvel Comics, probably because I stopped reading comics in the late 70s and that’s where they were then. Steve Englehart, Gerry Conway, Marv Wolfman, Jim Starlin, Rich Buckler. Jim Starlin does a good story, the last in the book, in which Superman teams up with Green Lantern to battle an evil alien in a Ditko inspired other dimension, all floating rocks and strange shapes. Starlin’s art didn’t look as good as usual so I think the inker let him down.

All in all, it’s a readable collection with some excellent nuggets. By the late 70s, DC was improving in quality and responding to the challenge from Marvel. The stories are tightly plotted but don’t go down the soap opera route which is a pleasant change. As with all these editions, a crazy person can pay hundreds of pounds for it but if you shop around it might be available cheaper. This simply emphasises the fact that fans should snap them up when they come out. DC Showcase Batman vol 6 with lots of Neal Adams art is now out so if you’re interested grab it quick.