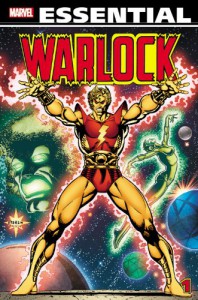 Adam Warlock is one of those secondary Marvel characters that talented people sometimes get a chance to play with, often with great results. Originally named Him and created in Fantastic Four # 66-67 by some mad scientists, Him vanished for a while after killing his creators and then reappeared to fight a certain Asgardian in Mighty Thor # 166. Him had decided he needed a Her for a companion and chose Sif, Thor’s girl-friend. The Thunder God was miffed and gave him a sound thrashing. After this defeat, Him retreated into his cocoon and didn’t re-emerge until Amazing Adventures # 1 which is the issue that kicks off this collection.

Perhaps it was the name Him, with a capital H, that inspired Roy Thomas to get all biblical with the character. The story goes like this: the High Evolutionary, having evolved into a god-like being in one of those grand metamorphoses that were all the rage in the seventies, decided to make a better Earth with better men. On the far side of the Sun, he made Counter-Earth and then evolved life on it at a speeded-up rate. This was tiring and he fell asleep at a crucial point. His old nemesis, the Man-Beast, evolved from a wolf way back in Mighty Thor # 135, ruined his plans out of pure spite. Devilishly, he introduced hatred and violence into the soul of man and so the old Earth’s history was repeated, albeit without super-heroes as Man-Beast didn’t want any competition. Him had befriended the High Evolutionary and so set out to act as the new Earth’s saviour and restore the dream, albeit with more fisticuffs than the biblical messiah used as this is, after all, an action comic.

It all started pretty well, with Roy Thomas scripting and Gil Kane drawing, but it soon lost its way under lesser talents. To be fair, this was a tricky theme, especially in the USA where Christianity is very strong. Although Adam Warlock got his own mag after a couple of issues it only lasted for eight and the story had to be wound up in The Incredible Hulk # 176-178. It wasn’t a bad story and it set the scene for greater things to follow.

Jim Starlin took over the character with Strange Tales # 178 and really followed on with the quasi-religious theme. Adam Warlock encounters an evil empire of religious fanatics devoted to a Man-God called the Magus. He makes it his mission to topple the Church of Universal Truth and defeat its leader. This gets complicated. As there are a number of surprises along the way, I will not spoil the plot for any comic fans who haven’t read it yet. Suffice to say that it’s all very cosmic and one of the greatest epics in the history of graphic storytelling. Jim Starlin is a brilliant artist and an even better writer. The Magus epic was almost bound to be followed by a sense of anti-climax but not so. True, there is a brief interregnum of quieter tales, including a comedy troll yarn, but then another cosmic episode occurs, tightly linked to the preceding stuff. Again, however, Adam Warlock couldn’t sustain his own mag and his tale concludes in those of other heroes.

There are some stories any comic fan worth his salt should have read, classics of the genre. ‘Watchmen’, Kirby’s ‘Fourth World’ stuff, Alan Moore’s ‘Swamp Thing’, the ‘Dark Knight’ stories of Batman, and Jim Starlin’s ‘Adam Warlock’. Therefore this volume really is… Essential!