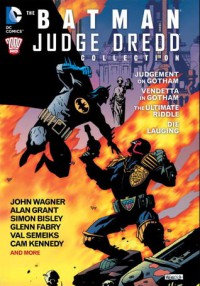 This luxurious hardback edition features four long stories printed on glossy, high quality paper. All are written by John Wagner and Alan Grant who cut their teeth on Judge Dredd and other strips at 2000AD before moving on to even greater fame and glory. The first yarn is ‘Judgement on Gotham’ in which Judge Death turns up in Gotham. Judge Death is one of the four Dark Judges who believe that since all crime is committed by living people then life itself is a crime which must be eliminated. Having wiped out all life in their own world they frequently cross to the world of Judge Dredd to do more wiping. From there Judge Death got to Gotham and Batman gets to Mega-City One when he puts on the trans-dimensional teleportation belt. As in all good buddy stories, he and Dredd don’t hit it off at first, though there is plenty of hitting. As the story develops old Batman villain the Scarecrow teams up with Judge Death. Warning; contains extreme violence and some very odd looking people. They look odd because they are drawn by Simon Bisley whose work is not entirely to my taste.

‘Vendetta in Gotham’ is a clever time-paradox story in which Dredd comes to Gotham and has a long fight with Batman, providing plenty of good action sequences. Further plot description would spoiler it but the Ventriloquist features prominently.
The art by Cam Kennedy was more to my taste than that in the previous story, having a bit of a Gene Colan look about it. I say ‘more to my taste’ rather than ‘better’ because these things are very personal. A lot of labour goes into the graphics and it is unfair to denigrate hard working professionals. I am a product of my genes and my environment (Marvel comics of the sixties and seventies) but should not let my own illogical preferences bias readers who may well love this modern gory stuff.

The Riddler, unsurprisingly, is the opening villain in ‘The Ultimate Riddle’ but he is only a pawn in a bigger game. Batman, Judge Dredd and an assortment of other violent chaps are gathered together to fight for the amusement of His Tyrannical Holiness the Emperor Xero. Batman’s policy of not killing people puts him at a severe disadvantage, as Dredd is keen to point out. The basic idea of good guys being forced to fight is obviously not new but it was well done and with a clever ending. The art by Carl Critchlow (pages 114-145) and Dermot Power (pages 146-149) was perfectly good. I should mention that, despite a tendency for one page poster images here and there, the storytelling in all these episodes is just fine; it’s always easy to follow what’s going on. That’s very important in comics.

Both story and art seem to get better and better as you work your way through the book, up to a point. That point was the long and excellent tale entitled ‘Die Laughing’. Batman’s arch-villain The Joker is teamed with Dredd’s arch-villains the Dark Judges in a long, convoluted tale with many moments of macabre humour. As befitting the best story this one had great art, though it did seem to get a bit exuberantly cartoon-like with the minor characters towards the end. No doubt one’s eyes do bulge when one encounters the Dark Judges but I’m not sure if they bulge quite as much as this. There is a cameo appearance by English actor Richard Wilson on page 220, in the bottom left hand corner. At least, it looks like him. Richard played Victor Meldrew in ‘One Foot in the Grave’ but might be better known now for ‘Merlin’, certainly in fantastical genre circles.

The last story ‘Lobo/Judge Dredd; Psycho-Bikers vs. The Mutants from Hell’ is the point, mentioned above, at which things stop getting better. They don’t get very much worse though and I enjoyed this piece of violent hokum quite a bit. Lobo is hired to protect a shape-shifter who, it turns out, has used a dimension hopper to go on the lam from Mega-City One. Chasing him for payment, Lobo goes to Dredd’s home town and ends up in a big fight with certain mutants. I think Lobo and Judge Dredd are the Psycho-Bikers of the title. The art by Val Semeiks and John Dell was appropriately ludicrous and the colours by Gloria Vasquez were suitably bright.

Obviously, appealing to fans of both Batman and Judge Dredd is a marketing man’s dream. Double your money and take it away, as they used to say on telly. The script and art here seem to me more from the Dredd stable but to be honest I haven’t seen much modern Batman. It could be similar. In any case, fans of both heroes might like to take a look.